Our friendship was forged in parenting daughters who became best friends in first grade and remain so, thirty years later.  We were a study in cultural contrasts.

She started her education in a drafty wooden one-room schoolhouse off a dirt road that snaked next to a rock-strewn creek.  I started mine in a neighborhood primary school made of cement block that was chock full of baby boomers. She had completed high school. I had three university diplomas on my wall: undergraduate, masters and doctoral. She was protestant, I was Catholic.  I was a psychologist. She was the lead administrator for the Calhoun County Department of Highways.

She was renowned, renowned, for her biscuits and gravy and pies.  When it came to cooking, I was renowned for nothing, except maybe the buttermilk pancakes I made on Sunday morning in the shape of Mickey Mouse. Their eyes were blueberries.

I loved Joan.  We connected in our devotion to our daughters and to each other’s daughters, in our shared womanhood, in our journey through the territories of peri-menopause and menopause, and in our love of shopping. Her smile could warm a glacier.

I’m sure Joan and I thought differently, but I do not know what about!  We never talked about politics, religion, or beliefs.  We never thought about anything but what we shared in common. She was wiser than me.  She taught me oodles about unshakeable faith and hope as she journeyed with brave grace and grit through two hellacious years-long battles with lymphoma and leukemia.  When she died, her legacy was kindness.

Joan tops my list of wise, compassionate, and brilliant women who have shaped me, inspired me, and asked me to be my best.

When I was young, my father encouraged me to get an education and my mother was in full support of that. After I finished my undergraduate degree, he said, “whatever you do, don’t become part of the intelligentsia.”

I wasn’t sure what he meant by intelligentsia, but I took it to mean, don’t get bigger than your britches when it comes to being educated.

When I earned my doctorate, he was in the audience at my “hooding” at West Virginia University, as were my husband and daughter, my Mom and all my siblings and their spouses and children.  After the ceremony, my Dad said he never thought he would have a “doctor” in the family.  He also whispered in my ear, “remember, you are not part of the intelligentsia.”

My father was the son of two Polish immigrant teens who came into the U.S. through Ellis Island. Last year, when professional speaking engagements made it possible for me to tour Poland, I went to the small, pristine village of Laskowa, my paternal grandfather’s birthplace.  It’s perched in the sub-Carpathian Mountains at the confluence of several rivers. It was abundant with small, colorful houses in hues of yellow, peach, lime green and bright blue, all with lace curtains in the windows and each adorned with well-tended flowers and small altars to the Blessed Mother, Jesus, or Pope John Paul II.  I was right at home in Laskowa.

I found the graves of my ancestors in the cemetery of 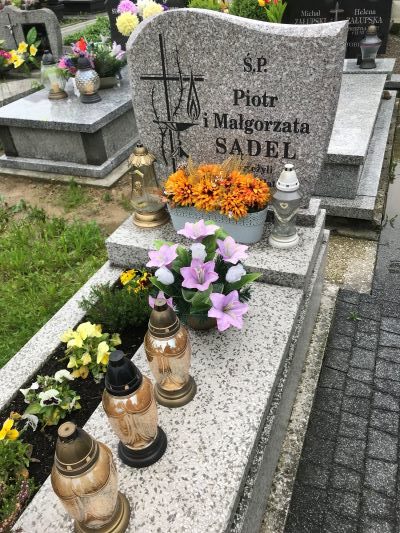 a stunning Catholic church set on a hill above the village. The cemetery was picturesque, with elevated slab marble grave boxes topped by votive lanterns, ranging from plain to byzantine.  A priest crossing to the Church from the rectory spoke a bit of English and inquired if he could help us.  My husband and I explained we were visitors from America and that I was a descendant of the “Sadel” family.  Our surname had been Americanized to Sandel. He said, “oh yes, that family is still here.  They are hard workers.”

During my doctoral psychology internship in Columbus, Indiana, I learned during an in-service training on multicultural diversity, that, historically, Polish people have a deep distrust of the “intelligentsia.”

Turns out that word has a complicated history. It’s a vague term, transplanted into Poland from the German lexicon that has two general meanings.

On the one hand it refers to anyone with at least a high school education engaged in intellectual rather than physical labor.  On the other hand, it referred to thought leaders, educated men and women who tended to be activists, who believed in serving others, and who sided with the weak, the oppressed and with the principle of social justice.

I fit both definitions, which discomforted my Dad! The intelligentsia threatened the political conservatism and religious beliefs of many Polish people. Now that he’s on the other side of life and has the perspective of the Eagle, I suspect my father is no longer worried about me!  He knows my heart.

Culture and identity wars have been around a long time. Identity politics have been fomented for years to pit people against each other, most often in the name of religion, preservation of corrupt power, and greed.

Culture and identity wars are historically fascinating but also meaningless at the level of an individual, authentic, ordinary lives rooted in love.  My experience with my friend Joan and with so many others like her, is that friendship transcends identity and labels when the heart, rather than the intellect, is claimed as common ground.

It’s quite funny really, that both Joan and I fit the definition of intelligentsia! We both did intellectual labor and we both loved to be in service to others, albeit in differing ways. Yet, our backgrounds and personal identities were as different as night and day. True love cannot be confined to categories, boundaries, and labels.

Thank goodness Joan and I knew that. We were spared the loss that would have occurred if we had been ships passing or warring in the night.

Dr. Linda Sandel Pettit, a priestess-at-heart and retired counseling psychologist, can be found at www.thedrspettit.com. Linda loves putting her intuitive nature, spiritual understanding and clinical experience in service to others. She is available for on-line consultations. For information about fees and packages, visit BOOK NOW. Email her at linda@thedrspettit.com.

Get my new posts in an occasional DrsPettit newsletter!